Baskervilles was founded in 1916 by Mr George Baskerville an experienced steeplejack and demolition contractor, The Company was mainly involved steeplejack work using horse and carts and demolition works were done by hand. His nephew Roy Chadwick started working for him in 1946 and in 1954 Roy took on the general running due to George becoming ill.

Roy took over the business in 1961 due to George’s Death, and began to expand the company focussing on the demolition aspect. He took on new employees, brought new machines and new vehicles. Roy’s established reputation earnt him success in gaining work from local councils, local businesses and the general public, This lead to gaining large and specialised demolition contracts.

Throughout the years Roy developed a team of dedicated employees, the majority working for the company for many years. Roy’s three children all worked for Baskervilles, Raymond worked on the demolition & drove HGV’s, Graham started on the Sales Yard and moved on to the demolition and Andrea worked in the office, handling the day to day accounts.

In the Late 1990’s Graham became more involved in the demolition and office works and began to go to site visits with Roy, being introduced to long term clients. In 2000 Graham took over the running of Baskervilles and in 2002 Graham became the Managing Director.

The knowledge of George and Roy has been passed to Graham making him a valuable asset to the growth of the company. Alongside Graham, Baskervilles are proud of our employees, who now have on average 15+years service. Our Foreman, Norman has worked for the company for 45years working for Roy and now Graham.

Both of Graham’s daughters now work for Baskervilles as it enters the fourth generation of a family run business.

We carry a workforce of dedicated demolition operatives who on average have at least 15 years service. We hold a wealth of experience and expertise which can prove immeasurable for some situations. We are a progressive company constantly upgrading our procedures and standards, offering the same high standard of customer service to both the public and private sectors.All our operatives are fully trained and hold all required certificates, machine licences and qualifications to meet current legislation.

Come and visit our 1.5 acre reclamation yard situated in Stoke-on-Trent. We are open 6 days a week and offer a delivery service within a 15 mile radius. Stocks frequently change depending on availability, and prices are continually checked to ensure our products remain competitive whilst still offering good quality. Materials reclaimed from demolition work are sold on the yard along with many new lines. 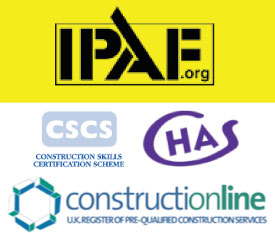